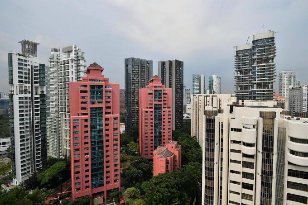 SINGAPORE condo resale prices edged up 0.6 per cent to a 12-month high in April over March, but volume of sales dipped by 1.7 per cent, according to flash data from real estate portal SRX Property on Tuesday.

Resale prices of non-landed private properties are up by 5.4 per cent in the first four months of the year, and 9.5 per cent higher than a year ago, SRX data showed.

The monthly price change for March was shaved slightly to 1.4 per cent, from an earlier estimate of 1.5 per cent.

T-O-X measures how much a buyer is overpaying or underpaying on a property based on SRX's computer-generated market value.

District 27 - formed by Yishun and Sembawang estates - posted a negative T-O-X of S$15,000, meaning that a majority of buyers in that district potentially purchased units below the computer-generated market value.

Nicholas Mak, executive director of asset management company ZACD Group, and Christine Sun, head of research and consultancy at OrangeTee, both noted that looking ahead, private residential resale prices will continue to rise.

Ms Sun said: "We expect prices to continue to rise further to at least the end of this year or middle of next year because the current market sentiment is still very strong and economic fundamentals like robust GDP (gross domestic product) growth, high employment rates, political stability, etc are in place to support the market."

Mr Mak projected the SRX resale price index will rise by 10 per cent to 15 per cent year-on-year.

He cautioned, however, that the private residential resale volume may not increase at the same rate as the price index.

"The current active en-bloc sale market has reduced the stock of older completed units available for sale as many non-landed developments have either been sold collectively or are in the process of going for en-bloc sale," he said.

"Hence, the owners would stop offering their units for individual sale in the resale market. As a result, the supply of completed units for sale in the market will drop, leading to limited growth in the resale volume. For the whole of 2018, the resale transaction volume is estimated to range between 11,000 units and 14,000 units," Mr Mak said.